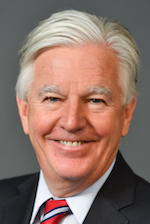 Marty was elected to the Blue Cross Blue Shield of Massachusetts Board in 2017.  As a director, he helps set the company’s strategy and overall direction. Within a highly competitive and heavily regulated business environment, the board oversees and governs the company’s operations, which includes providing health care coverage to individuals and public and private employers. Marty serves as chair of the board’s governance committee and is a member of the health care quality and affordability committee.

Marty is the President of the five-campus University of Massachusetts system, the third largest employer in the Commonwealth with a $3.5 million budget.

Under Meehan’s leadership and with his support and advocacy, UMass has reached new heights and achieved historic milestones:

Previously he served as chancellor of his alma mater, UMass Lowell.  Before that he had a long career in public service including serving for 14 years in the U.S. House of Representatives representing Massachusetts 5th Congressional district and as First Assistant District Attorney for Middlesex County.

Marty currently serves on the Natixis board of trustees and serves as an audit committee financial expert, as defined by the SEC. He also serves on the board of directors at The Association for Public and Land Grant Universities (APLU).