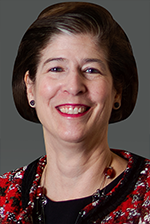 Mary Strother was elected to the Blue Cross Blue Shield of Massachusetts board in 2022. As a director, she helps set the company’s strategy and overall direction. Within a highly competitive and highly regulated business environment, the board oversees and governs Blue Cross’ operations, which includes the provision of health coverage to individuals and public and private employers. Mary serves on the audit committee and the health care quality and affordability committee.

Mary is senior vice president and general counsel for Northeastern University, serving  as the university’s chief legal, compliance, and risk officer. She also leads the offices of labor relations and public safety.

Before joining Northeastern, Mary served as first assistant attorney general of the Commonwealth of Massachusetts, where she oversaw investigations and enforcement in areas such as public protection, healthcare and fair competition, energy and environmental enforcement, and criminal prosecutions. She also played a key role in establishing the Office of the Attorney General’s employee well-being initiative within the organizational development and inclusion office.

Mary spent two decades at the global law firm WilmerHale and served as the firm’s deputy general counsel for seven years. She began her legal career as a clerk in San Francisco’s United States District Court and the United States Court of Appeals for the Eleventh Circuit.

Named a 2020 Top Women of Law by Massachusetts Lawyers Weekly, Mary has served on a range of boards and committees to develop women as leaders in the law, ensure ethical legal practice, and promote public trust and confidence in the judicial system. She currently serves on the advisory committee for Princeton University’s internships in civic service, mentoring students in internships at nonprofits and public agencies.

Mary earned her undergraduate degree from Princeton University and her Juris Doctor from Columbia Law School.