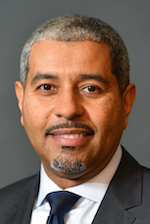 Manny Lopes is executive vice president, public markets and government relations, for Blue Cross Blue Shield of Massachusetts, the largest private health plan in Massachusetts and one of the largest independent, not-for-profit Blue Cross Blue Shield plans in the country. The company serves nearly 3 million members and more than 20,000 employers and is consistently rated among the nation’s best health plans for overall member satisfaction and quality.

Manny joined the company in 2021 and is responsible for Blue Cross’ Medicare and government and regulatory affairs divisions. He has long history of developing innovative programs that improve health care quality, access and equity

Previously Manny served as president and chief executive officer of East Boston Neighborhood Health Center, the largest community health center in Massachusetts and one of the largest in the U.S. Under his leadership, the health center grew dramatically, increasing the number of patients served by nearly 40% and adding two state-of-the-art facilities. Before being named the health center’s president and CEO in 2012, Manny served in a variety of leadership positions there including in IT, human resources, and operations.

Manny served on the Blue Cross board of directors from 2017 until joining the company in his current role.

He is the co-founder and founding chair of the Community Care Collaborative, the largest Medicaid ACO in Massachusetts, which was  created and governed by health centers and exclusively focused on advancing community-based care for MassHealth members. Manny also co-founded Advocates for Community Health, a national advocacy organization for innovative health centers focused on equity and impact.

Manny has served on a number of health care and government boards and committees. He is currently chair of the Boston Public Health Commission Board, which serves as the City of Boston’s board of health. He also serves on the Greater Boston Chamber of Commerce and the Institute of Contemporary Art (ICA) board of directors.